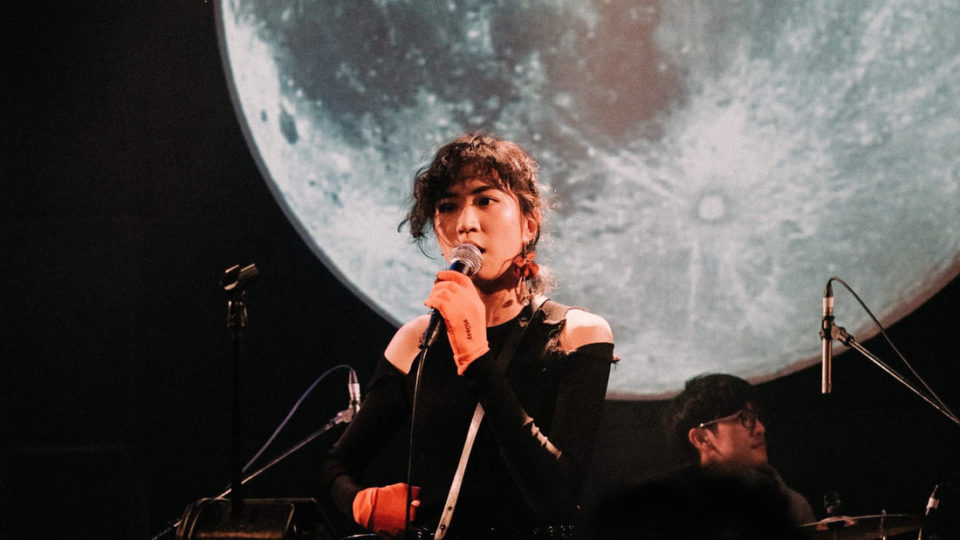 Interview with 9m88 – Paving Her Own Unique Path

Edgy, retro and with a name that nobody knows how to pronounce correctly, 9m88 is every hipster’s dream. Exploding onto the indie scene late 2016 after her duet with Leo Wang ‘Weekends with You’ made its way across the interwebs, the creative sprite has already established herself as one of the scene’s freshest and most anticipated acts. To date, the Jazz/R&B singer-songwriter has only released a handful of tracks including a two-track vinyl, but already has a strong following who are enthralled by her 90’s-inspired wardrobe, mop of permed hair and uniquely retro/tongue-in-cheek musical style.

For such an interesting singer, it is no surprise that she also has a unique musical taste that sets her apart from the usual aspiring-artist candidates.

“I started listening to Hip-Hop, R&B when I was in middle school, and I started dancing afterwards. That’s the moment I got to listen to music in these categories. But as I always said, after knowing Erykah Badu’s music, I really feel I can make music like that. Jazz came afterwards, and my journey is still going on.”

Initially starting her journey in the creative arts sector by pursuing design and fashion, the gutsy artist explains that it took a lot of courage for her to be honest with herself about her love for music and performance.

“It took a year or two to really make up my mind and change my path. I really wanted to do music but never had confidence in pursuing it. When I was a fashion intern in NYC a few years ago, I decided I should just go for what I really desire. So, here I am!”

But at the same time, this unique foundation in design and fashion has been crucial in setting 9m88’s image and offerings apart from the rest. In honing an eye for unique, aesthetically creative visuals, 9m88 has been more able to articulate her creative direction to audiences in a way that accurately represents her.

“I have many friends who are active in design/film/fashion background, I get influenced by them, at the same time, paying equally attention to visuals as well as music is important to me. Good visuals open a new door for listening/seeing music.”

Yet not only has 9m88 been able to commandeer her own creative direction through her knowledge of fashion, design and music, but also through her unconventional journey to debuting as an artist.

“Before 9m88 was recognized, I was always waiting for an opportunity to become a ‘singer’, which is to follow a certain path to get a record deal and so forth. But it didn’t really happen. Meanwhile, I was too afraid to have others decide what I should sing, wear, act. I still am.  When I started school in New York, I realized I really need to work this out on my own if I want to be captain of the ship. It takes patience and extra work, but it’s worth it.”

And although independently managing her career while studying in The Big Apple means extra trips back and forth for shows and gigs, the driven artist makes it work (with the help of her wonder woman manager Mia Yen); having hosted tours both in Taiwan and Tokyo in the past few months to celebrate the release of her two-track vinyl EP ‘Nine Head Ninano’. Indeed, the global citizen is not just inspired by local Taiwanese culture, but also by all kinds of Jazz and R&B works.

“My influence is mostly from Jazz and R&B etcetera. as genres without Nationalities. I’d say I dig many Japanese musicians’ works a lot. They just know how to interpret their ideas with very colorful images.”

​Taking inspiration from her daily life and her own experiences, 9m88 describes her works and her personality as “straightforward and sarcastically honest”; tendencies that certainly come through in her music. But at the same time, the themes and visuals she explores in her music are almost otherworldly in nature, as she tests the limits of creativity with her outrageous and satirical visuals. This ‘unrealistic’ nature is certainly clear from 9m88’s tendency to dream big, as seen from her long list of artists she’d like to work with.

“If you’re talking about my dream list, I want to work with Anderson. Paak, Oddisee, and cool producers like Flying Lotus, Mndsgn, 林強,  Singers like 方大同, 蛋堡, Joyce Wrice, Fatima. I can go on and on… I just love their music, and it causes no harm to dream big lol.”In a market cluttered with packaged, superficial artists, 9m88 certainly stands out for her ability to create an entirely coordinated visual and audio experience which audiences can immerse themselves into. Willing to veer on the side of the weird and unconventional to gather the elements that make up her musical and artistic vision, 9m88 has created a world; almost an ecosystem which is tailored especially for her. In the craziness and madness of New York City, 9m88 has created a little bubble for her content that reaches across national borders to prove that good music can be appreciated by anyone; anywhere. 9m88 will be releasing her first full EP this year, and also has a couple of collaborations scheduled for release. Stay tuned by following her on Facebook, Instagram or YouTube!