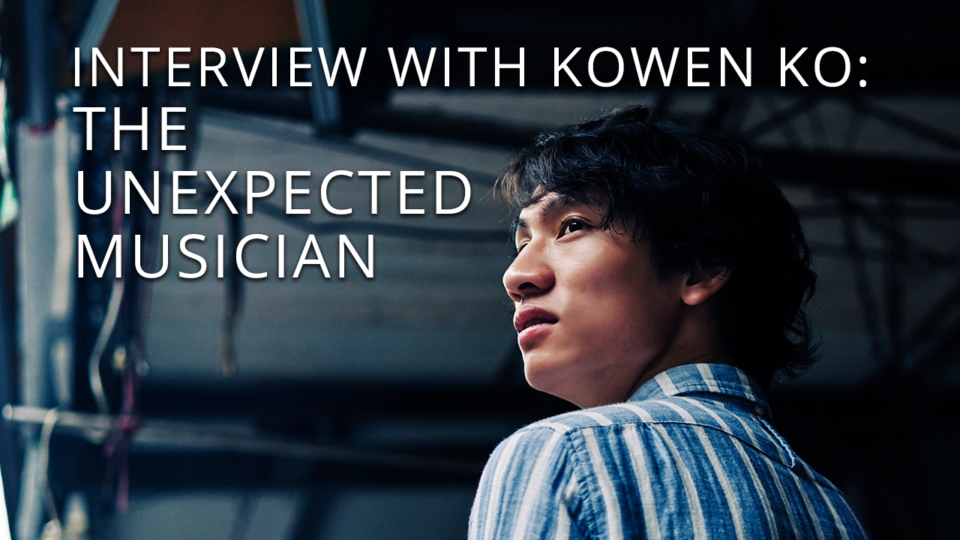 Cream of the C-pop #3: Interview with Kowen Ko 柯智棠 – The Unexpected Musician

In collaboration with Taiwanese YouTuber/singer-songwriter Dena Chang, Asian Pop Weekly is launching an all-new video & print interview series called ‘Cream of the C-pop’ where we go deep with our favourite Mandopop artists to create effortlessly engaging content accessible for both Eastern and Western audiences. Each episode will comprise of a video interview and tailored game segment hosted by Dena aired on her YouTube channel. Kowen’s written interview will first be released on Asian Pop Weekly, followed by the video on Dena’s YouTube soon after.

Kowen Ko (柯智棠)’s low, husky voice and guitar-clad figure tugs at the heartstrings of many. But few know that being a singer was never on the 28-year-old’s plans. Neither did he grow up listening to Taiwanese Mandopop.
​
So in our interview with the 2016 Golden Melody Awards Best Mandarin Male Singer and Best Newcomer nominee, it seems like he’s come a long way. And now that we have a better idea of the spontaneous, humble soul behind the voice, we’re here to share it with you.

“I started off as someone who totally didn’t sing. I wouldn’t even sing when I went to KTV with my friends.”

It was only after being roped into a singing competition in his third year of university that the singer-songwriter discovered his musical talent.
​
After realising his potential in music, the then-senior year student threw himself wholeheartedly into the craft. From accompanying himself on the keyboard to picking up the guitar, he did it all. “But I never thought I would become a singer. I just liked music, so I wanted to do it.”

Then after graduating from university in 2015, he sang ‘It Was May’. That became the theme song for Kingston’s advertisement ‘A Memory to Remember 記憶月臺’ – and the rest is history.

But since his debut, Kowen hasn’t been your typical Taiwanese mandopop artist either.

His first album, ‘If You Still Wander 你不真的想流浪’ (2015) comprised of both English and Mandarin songs. And most of these 10 tracks are inspired by folk and British music, giving them a distinctive sound different from mainstream Chinese pop ones.
​
“I’ve loved movies since young. I used to be a movie nerd and would stay at home watching lots of them … so the kind of music that influences me is overseas music.”

“I didn’t listen to Taiwanese mandopop music because there was no TV at home, so I didn’t know the songs from Taiwanese idol dramas that my friends talked about in school.”

That explains his current musical style of slow, folksy beats, as well as why he sings so fluently in English – although he’s never stayed long in an English-speaking country.

“As I always listen to English songs, I’ve already learnt the proper pronunciation of English words in my songs.”

His formative years also shaped his preference for composing English songs over Mandarin ones – but so did other differences between composing in each language.

“To me, English is more versatile … To express a word in Mandarin, you need to use 3 or 4 Mandarin characters, whereas you can convey it in just one word with English. This translates into considerations between lyrics and melody that you have to be aware of.”

But when asked to give some advice to aspiring musicians, Kowen laughed before admitting that he doesn’t see himself as a professional composer. “I can’t write songs if I don’t have inspiration … it’s a very spontaneous process.” And in times like these, he travels to spark his creative juices.

The past 2 years that Kowen’s not been releasing new songs, he’s left his footprint around the UK. Within 40 days, he covered London, Scotland, and Ireland solo. No schedule, nor rushing from place to place – the globetrotter completely winged it.

Christmas saw him wandering the lonely streets of Edinburgh, where all the shops were closed for the holidays. “I thought Christmas would be a festive period, but the place was very deserted.”

He recounted an experience in Birmingham as his most horrific travel memory. That was where he witnessed a fight in McDonalds – arguing, belt whipping, and all. “They were blocking the exit … so I went back to my seat and waited for them to finish fighting.”

After many adventures, the avid traveller’s now back in Taiwan. And true to his word, his overseas experiences did inspire his musical process – his new 10-track album, ‘吟遊 Songs of The Bards’, is proof. In it, you’ll hear upbeat, rock and roll elements alongside his trademark folksy sound.

But even successful, album-releasing musicians like Kowen go through tough times. His main challenge? Not being able to produce songs.

“You got nothing” is how he puts it.

“If you don’t have upcoming performances, or aren’t writing new music, … you feel very aimless … It’s an experience that’s ‘not okay’.”

When asked how long this phase of being stuck in a rut lasted, Kowen laughed before saying “There’s a time lag of 3 years between my previous and current album!”

Despite that, the musician’s come a long way – from someone who wouldn’t sing at karaoke sessions, to a guitar-strumming musician charming audiences in Taiwan and Singapore.

The future is bright for this 28-year-old. What’s on the cards for his future plans? “If I can perform overseas at music festivals, that’d be great.” ​Ultimately, the easygoing musician leaves much up to the natural flow of things – but if all goes well, we’re crossing our fingers that we’ll see him on a larger stage soon.

Kowen Ko’s latest album ‘吟遊Songs of The Bards’ is now available on all major streaming platforms including Spotify, iTunes, KKBOX, MyMusic, FriDay music, MOOV, and 網易雲音樂. Get tickets to his solo ‘吟遊  Songs of the Bards’ concert at Taipei’s TICC on 25 August here.