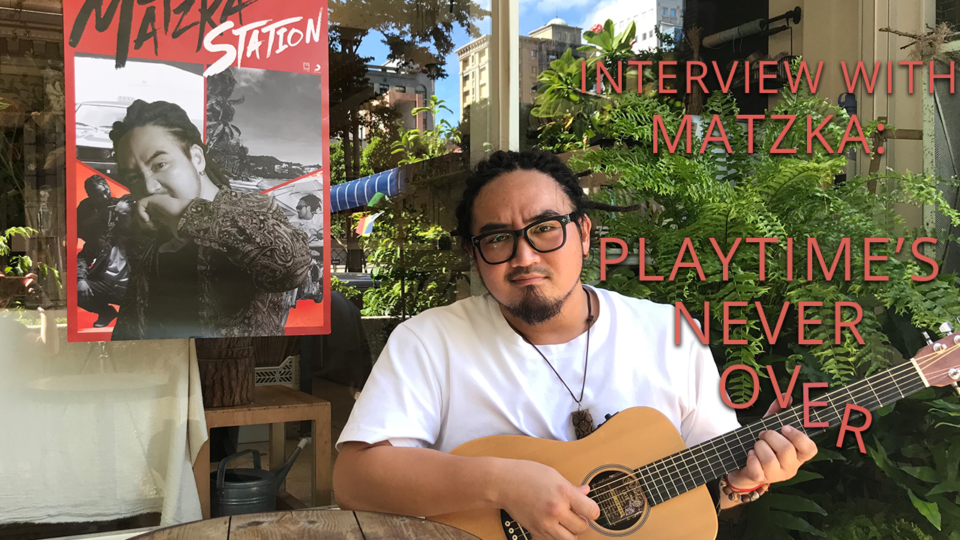 In collaboration with Taiwanese YouTuber/singer-songwriter Dena Chang, Asian Pop Weekly is launching an all-new video & print interview series called ‘Cream of the C-pop’ where we go deep with our favourite Mandopop artists to create effortlessly engaging content accessible for both Eastern and Western audiences. Each episode will comprise of a video interview and tailored game segment hosted by Dena aired on her YouTube channel. Matzka’s written interview will first be released on Asian Pop Weekly, followed by the video on Dena’s YouTube soon after.Squinting in the heat of the day as he stepped out of a cab, Matzka arrived at Chu Fang Café for our Cream of the C-pop interview, accompanied by his team. A slightly intimidating figure, I hastened to introduce myself, to which he merely replied with a slight nod of his head. We soon realised that Matzka was a man of few words…at least until he started talking about music.

The 29 year-old hailing from the Paiwan tribe in Taitung struck an interesting chord with us; declining to rest indoors before filming and instead chatting with his team or sitting patiently next to Dena in the wilting heat before filming began. Given his heritage, he declared flippantly that this was something he was very much used to.

Another thing he hilariously seemed very used to was propping his feet up against something, requesting a chair to prop his feet up on while the entire interview was ongoing. Whilst initially giving us the impression of being slightly intimidating, Matzka soon showed himself as someone who was full of quirks, and a treasure trove of information especially when it came to music, and the reggae genre.

Starting from the beginning of his musical journey, the gruff yet jovial singer-songwriter told us that he had never intended on becoming a singer-but had always been interested in working behind-the-scenes on music. While working in a recording studio, his amazement at the production process filled him with resolve to learn more.

“I was also working at a recording studio…and I knew that there was song writing, arranging, mixing, and I was really interested in these things, but less so in being an artist. Yes I was really interested in behind the scenes. And then started trying to arrange myself, borrowing other people’s computers and asking them how to create certain sounds, and trying things to create my first demo (Mado Vado). That’s where everything started.”

Yet he had always been interested in singing and song writing on the side, and had performed live at venues before. It was only when he participated in the Taiwan Composition and Songwriting contest with his band in 2008 using this very demo and won first prize that it opened up avenues for him to truly pursue creating music as his full-time career.

“Actually I think it’s all a matter of fate. At the beginning, I wasn’t a musician. I started very late in the game, around 26, 27 years old. That’s when I really started to get into music, song writing and what not…”

The artist even shared that this organic process of creation that allowed him to win these competitions were also how he discovered his affinity with the Reggae genre.

“When I finished that demo (Mado Vado), it already had that Reggae feel. Afterwards, someone told me ‘this kind of has a Reggae feel’. ‘What’s Reggae?’ (I said). Then afterwards I realised that within this genre-no matter if it’s song writing or performing, I am most comfortable in this setting. So I just want to continue on this path.”

​Although he began by knowing nothing about the genre, the famously dreadlocked Taiwanese musician is now more well-versed on the subject than many musicians within the Mandopop industry, proffering lists of subgenres of Reggae and describing his music in technical terms that were almost lost on me. He also shared how promoting and battling misconceptions of Reggae music has become a lifelong passion for him:

“In promoting Reggae music…the market is very small, everyone knows that. But I like it and don’t want to give up doing this style of music. So I constantly try to experiment with fusing it with other musical genres to allow everyone to more wholeheartedly accept Mandarin Reggae. And I also want to be able to introduce everyone to all the different Reggae subgenres. Because most people would think of Reggae and say ‘oh, I know it. Bob Marley.’ Or they think ‘hmm this genre, this is what my dad listened to’. But now a lot of what we hear in nightclubs is also reggae…”

After a quick history lesson on the roots of Reggaetone, (a fusion of Reggae that can be found in the tenth track on his latest album titled ‘Melevlev’), Matzka switched gears, showing off his more humorous side. Indeed, when asked what his special skill was other than music, his answer was “playing games”; after which he launched into a lengthy explanation on the strategies he used when playing his ‘exploration’ games.

After unsuccessfully trying to convert Dena into a gamer, he hit his stride and revealed that his latest third album ‘Matzka Station’ was actually inspired by his love for gaming, hence the similarity of the title to the ‘Playstation’ console (gamers can click here to download the Matzka Station PS4 theme).

“This album’s inspiration came from the fact that I really like playing games, and I feel like life is like a game, you have to get past all the obstacles no matter what, and there are a lot of obstacles, but I think the hardest obstacle is to do with the opposite gender. As you age you deal with different kinds of relationships, and different relationship-centred situations. You ideas will be different, so I think that this is something that everyone needs to learn. So I picked this hardest obstacle to be the theme of this album. And worked with Playstation to design it like a game.”

It’s obvious that Matzka has an affinity for the concept of ‘playing’ and ‘games’; no matter it be on the computer or through his music.  Sitting alongside Dena during the hour-long interview, his fingers itched when we brought out her Baby Taylor, and not long after he shyly asked to borrow it, strumming and plucking on the guitar as if it was his personal fidget cube as we powered through the rest of the interview.

There is a pureness and natural passion to Matzka’s love for music that transcends the boundaries of spoken language. Through every nod of his head to the rhythm of the guitar, to the way he savoured every note that hung in the humid summer air that day; this energy and quiet passion is something that the talented artist takes everywhere he goes; silently waiting for the right moment to unleash his voracity and organic creativity onto the audiences below.

For sure, his upcoming concert at Legacy promises to be no different, where the singer jokes that you don’t even have to watch him on stage if you don’t want to, he just wants everyone to come and join his musical summer party.

I have always advocated the use of email interviews-a controversial stance especially for music journalist purists; but if any artist has truly rammed home the value in face to face interviews for me; it would be Matzka. For he is an artist whose actions speak louder than his words in every sense of the phrase.

The concept of play; that of creativity and organic innovation seems to cut deep to every fibre of his being; so much so that not doing something which feels like play-be it music or gaming-might be unnatural for him. So when life gets you down, maybe open your Matzka Station and have a listen. Perhaps, you’ll find a gamified slice for life that you never knew existed.

Matzka’s ‘Round 2 Summer Party’ Concert will be held at Legacy Taipei on the 28th of July, from 6-9pm this Saturday. Be there or be square! Stay tuned for Dena’s Cream of the C-pop video (and a very special jam session between herself and Matzka) on the 13th of August!