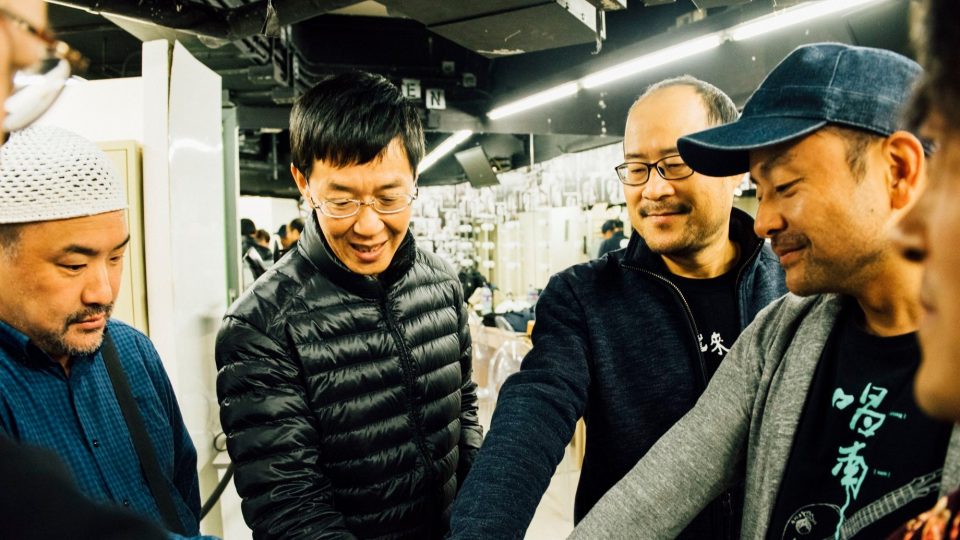 Lyricist, producer and activist Chung Yung-Feng 鍾永豐 has been an instrumental part of the Taiwanese music scene in a diversity of ways across the last two decades. As the partner-in-crime of fellow musician and activist Lin Sheng-Xiang 林生祥, the pair have a deep connection that stems from their hometown of Meinung in Kaohsiung, Taiwan, and the environmental issues they have witnessed firsthand over the years.

Together, the pair have witnessed and fully participated in the blossoming of the environmental protest/music scene through their Labor Exchange band project in the late 90s to early 2000s, and together continued this work through the Sheng-Xiang & Band moniker til present.

As the penman behind these striking, contemporary works that explore the intersection between music and environmental issues, Chung shares that his passion is deeply intertwined with how policies affected his hometown of Meinung starting in the 70s and 80s.

“Just around the time I was finishing high school and starting university…there was a complete restructuring of the farmland in Meinung. This ‘restructure’ was supposed to get rid of all the illegally built irrigation canals and organise the high floodplains near rivers to open up a wider area of land that could be used for planting crops. And another really important reason for this was to stamp out all of the illegal farmland and also the farmland of different sizes so that they could bring in a more structured, more economically effective and more automated farming techniques. Over those couple of years, there was a huge change in the landscape, the terrain, even the river in Meinung. It meant that the countryside we remembered from our childhood has completely disappeared over a few short years…Then, I got in to university to study civil engineering, where my focus was on geotechnical engineering… So when I was studying, I couldn’t help thinking about those monster bulldozers which came to ‘restructure’ the whole farmland back at home. It was from time I started to think about environmental issues through the lens of my own personal experience.”

Although the issues Sheng-Xiang & Band discuss are serious, heavy, and often hard to digest in day-to-day conversations; Yung-Feng strips these stories down to bare-bones concepts, adding colour through his own personal experiences to truly move audiences. He shared with us some of the impacts Meinung has seen over the years, including the longstanding adverse effects building petrochemical plants in the area had on local residents.

“From the 70s onwards, they started to build a huge petrochemical plant in the south west corner of Meinung. When it came to the monsoon season in summer, the air quality would noticeably deteriorate, so ever since I started middle school, there were already widespread cases of people with breathing difficulties.”

Another unique thing about the works of Sheng-Xiang & Band is the language in which their works are created. As native Hakka speakers, both Yung-Feng and Sheng-Xiang create and perform in the Hakka language, even on topics that may not necessarily be centred on the Hakka community.

“We create mostly in our native Hakka language. To majority of people, Hakka is probably not a familiar language, but for us using our mother tongue is the most natural medium for musical expression, especially because our creative philosophies always return to our people. These methods of understanding often connect with our folklore and language traditions, and thus are deeply entwined with our themes and issues. So we choose to create in this language. This is in fact a natural progression musically. To be able to create music so natural then creates the possibility of moving beyond language, to bring our thoughts on these issues even further places.”

For example, in an interview with The News Lens, Yung-Feng shared that songs such as ‘The South Wind 南風’ and their entire 2016 album ‘Village Besieged 圍庄’, they discuss issues that not only affect Hakka communities, but also ethnically Minnan villages. In this instance, Chung chose to write in Hakka to allow for more distance and perspective on these issues.

The interactions between the band’s musical inspirations, themes in the music, and languages used are things that Chung seems particularly skilled in identifying and using to his advantage. When asked what kinds of music inspire him, he turned our question on its head and instead asked us: “what is the link between the issues we are interested in and ones’ musical direction?”

“Music itself gives us inspiration. Instead we should be asking ourselves, what is the link between the issues we are interested in and ones’ musical direction?  For example, when we were making our album “Village Besieged”, we were thinking about how they had built the petroleum plants mainly in the south west coast of Taiwan, so mainly in ethnically Minnan villages. For these villages, Pak-kuan (北管) music and Taiwanese opera (歌仔劇) are really important traditions, so when we were creating the album we made sure to incorporate these two elements. We hope to discuss environmental issues in the context of its current culture, so other than folk and rock, of course there will be punk and some improvisational Jazz. We still think about the music that inspires us, and how we can link it with ourselves in interesting ways.”

Though their works are released sporadically through alternative avenues to the Maydays or Sodagreens, Sheng-Xiang & Band is nevertheless one who has made strides for Taiwanese music both at home and abroad with their critically-acclaimed brand of music. No matter where they go and what kinds of audiences they meet, the band seems to move audiences with their live music in truly magical ways.

“While we are touring in Taiwan or overseas, the most important medium is still the way we present our music. We have to thank our excellent musicians, who continue to collaborate with us, and allow our music to have many diverse faces. First of all, listeners are moved by our music and thus develop interest in our messages, or cultural background. After gaining interest, they begin to look back and understand our musical experiences, and create an even deeper appreciation.”

I am by no means an expert on environmental issues, let alone the environmental issues that plague rural areas of Taiwan. But what draws me especially to the work that Sheng-Xiang & Band and Yung-Feng are doing is the single-mindedness and drive with which they have dedicated themselves to shedding light on the town of Meinung.

“As long as you truly immerse yourself in life in Meinung, it’s hard not to be influenced by its dynamic, full language and culture.”

While it is not uncommon for individuals to dedicate themselves to tasks or goals for years at a time; most of the time these goals are lofty, aspirational, and sometimes even unsustainable. Yet for Sheng-Xiang & Band, their approach is in fact quite the opposite.

By focusing on a topic close to their hearts – a town no larger than a population of forty thousand – and truly dedicating a lifetime to exploring its issues and culture, they are able to not only bring awareness to the issues at hand, but enable audiences to unearth even bigger questions for themselves relating to the world around them. Yung-Feng and Sheng-Xiang & Band are true artisans at the craft they have chosen. To so finely, with such care produce works of such meaning and quality whilst dedicating entire lifetimes to their work renders them masters of their craft. They are living proof that if you truly believe in what you set out to do and stay the path, you will never cease to find value (and create it) through your work.

Find out more about Sheng-Xiang & Band through their Facebook page, and keep an eye out for their upcoming works. They’re bound to be both meaningful and mouth-watering.